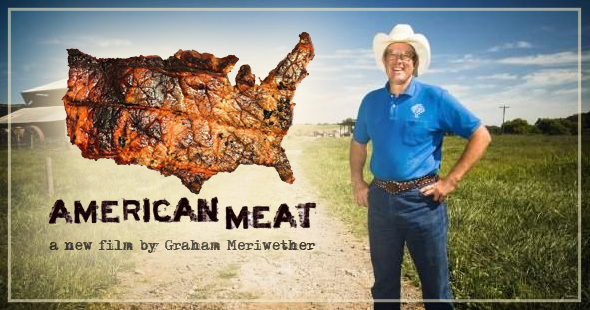 American Meat (the film)[/caption] If you love documentary-style films about redeeming the American food system – there is no shortage of movies to choose from these days. We just heard about this latest film on the Polyface Farm blog (Joel Salatin is in the film):

“American Meat is a new documentary being released this weekend – Saturday and Sunday. The debut showings will be held in Waynesboro and Staunton [Virginia] in honor of Polyface’s Field Day. Zynodoa Restaurant in Stauton will be hosting a Farm Fresh Supper with Joel and Daniel Salatin in attendance (Joel at noon and Daniel in the evening.) Want to learn more about the movie? Contact the Visulite Theater in Staunton and the Zeus Theater in Waynesboro for show times and tickets.”

What I find unique about this film project is they seem to be using it as merely a starting point for action. The film American Meat is apparently connected with a video-based social network called Leave It Better and another sister project Harvest Cloud, that will seek to combine online shopping with local food and convenient delivery to it’s customers. Is this a new paradigm in activist film-making? Check it out: Learn more about the film here, and here.]]>