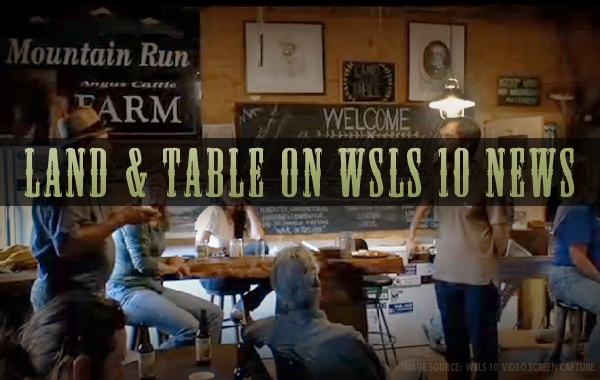 Land and Table on WSLS 10 News[/caption] Our October monthly potluck gathering was a unique evening as we hosted the folks from Relay Foods who came to talk with us about how our farmers and food producers could collaborate with them as they begin making deliveries to Lynchburg area customers. It was a lively evening of conversation and good food. But we also had other guests that evening – the fine folks from WSLS10 News. For those of you who missed the broadcast, or if you are like me, don’t watch television, you can view an excerpt of the transcript and see the video below (please note: the cows on the screen next to the reporter at the beginning of this video are not Mountain Run Farm cows and…they mention that this was just a gathering of farmers but our monthly gatherings are for anyone interested or involved in the local food movement – our gatherings are always a mix of folks.) WSLS 10 NBC in Roanoke/Lynchburg Va

BEDFORD COUNTY, VA -Life on Mountain Run Farm in Bedford County is a busy one. From chickens roaming the yard to a beautiful field full of cows. Most importantly are the more than 20 local farmers getting together over dinner to talk about business and sustainability. Ben Coleman runs Mountain Run Farm and this month’s gathering was on his property. “Farmers don’t leave their farm very often,” says Coleman. “It really calls for having a social get together to get us together.” Farmers from all across our area, like Brent Wills, take part in the monthly gatherings. “This group actually came together a couple of years ago to create a network and produce a way to sort of get the word out,” says Wills. “Over the years, we’ve tried to learn more each year about living off the land and using the food that is grown here,” says Coleman. “Buying locally and eating locally is much more important for the economy,” says Wills. “You’re keeping jobs local and money local. I know Walmart has pork chops for $1.99 a pound, but that money is not staying at that Walmart or at that community. It’s going somewhere else in the world.” And for the products they need but don’t produce, they rely on each other. “We’re trying to fill each other’s place, to say if you really love raising chickens, you raise all the chickens,” says Coleman. “I love raising beef, so I will focus on that. We’re trying to spread it out so it’s not too much on any one family.” “Eating locally is important for us as producers,” says Wills. Important because for them, this isn’t just a job, but a way of life.