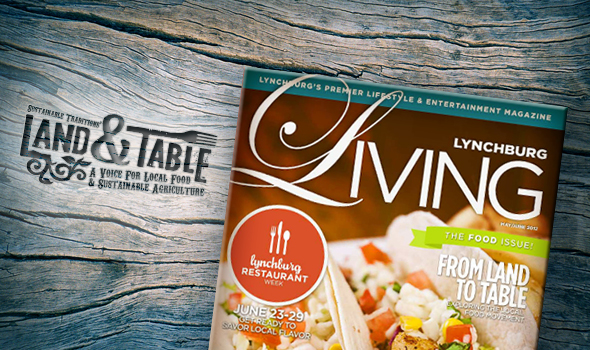 “…Jason Fowler, a transplant from Northern Virginia, along with his wife, Pam, was vexed by a similar theme. Over the years, the couple grew stronger in their conviction to become self-reliant. “We just started with a garden,” Jason remembered. The Fowlers consider themselves a part of a post-consumerism movement. “Consumerism cannot continue forever,” Jason pointed out. They also felt a spiritual conviction to conduct their lives in a way that fosters intentional community. “In Northern Virginia life was very disintegrated and disjointed. There was an absence of community,” Jason said. So after migrating south and living in Lynchburg for a bit, the couple, along with their children became homesteaders on the Village Farm in Bedford, Virginia, owned by Joe and Teresa Dittrich. There on a wildly picturesque spread complete with a flowing stream and incredibly cute lambs, Jason and Pam tend to chickens, sheep and cows. Lucy, the dairy cow, is milked daily in a late afternoon ritual. “I grew up in the ‘burbs. Interacting with a cow … has been a learning experience,” Jason said with a gleam in his eye. Jason points out how much most of us rely on industrial farms to get meat, vegetables and grains. Skills like milking a cow are hard to come by these days. “These are skills we all knew a couple of generations ago,” Jason reasoned. The Land and Table Movement It’s not just learning how to milk that gets Jason zealous. He has been an integral part of a local food movement occurring in Lynchburg and the surrounding areas. Through an initiative called “Land and Table,” people who care about sustainable agriculture and the local food movement gather once a month to network, discuss local issues and most importantly, eat together. Fowler wears two hats. As a member of the Region 2000 Technology Council and a local homesteader, he serves as a liaison between farmers and regional leaders. According to Fowler, the intention behind creating “Land and Table” was “to seek the shalom of our community, to seek the renewal of our local economy, the land and our bodies. We are asking ourselves, ‘How can we help grow the local food movement and sustainable agriculture in our regional foodshed?’” Danielle Hunter of Spring Mill Farm, along with her husband, HB, are part of the core “Land and Table” team as well and provide artisan meats and cheeses locally. They sell their cheese at the Lynchburg Community Market, the Forest Farmer’s Market and will soon be selling at the new Campbell County Farmer’s Market. Their pork and eggs are available at the Lynchburg Community Market and their cheeses are sold at the Bedford Avenue Meat Shop and seasonally at the Farm Basket. Their cheeses can also be found at dish, Mangia, Rivermont Pizza, Bull Branch and Isabella’s. In addition, their pork is used in dishes at Bull Branch, Rivermont Pizza and Isabella’s. According to Danielle, “’Land and Table’ has provided fellowship with other farmers who share a similar interest in being a part of the local food scene, and for those who share an interest in sustainable farming. We appreciate connecting with farmers who offer similar products so that we can network and help each other out with maintaining a constant supply of goods to our customers.” “Land and Table,” she added, is open to the community “with the purpose of establishing a local food forum from which a larger foodshed renewal movement can grow…” (Read the entire article at LynchburgLiving.com)

You can also read an interactive version of the full article and magazine with all the pictures: here.  ]]>